Our mission is to promote and support the continuous development of sustainable coffee supply by our members to the market in order to maximize financial returns to members’ cooperatives and in turn promoting the living standards of our member farmers.

To be a leading and dynamic cooperative union in Africa and world over by 2025.

How did it start?

Yirgacheffe Coffee Farmers’ Cooperatives Union – Acronym YCFCU, was established in June 2002 for which shortly after, was registered as a cooperative society with its proclamation (No. 147/1998). The union started with 13 member organizations. At the moment, these primary cooperatives were established to serve as a political weapon for the Dergue Regime. These 13 Cooperatives continuously faced interference from the then government as well as other organizing agencies, in their resources and finances and were always exploited and worked under harsh conditions of corruption. After the downfall of the past regime, the primary cooperatives ceased their operations as the socialist model had worn out. They lacked ownership nor governance and in turn, it was no longer profitable to attract the farmers which led to their bankruptcy.

After the cooperative society’s proclamation was enacted, coffee farmers were reluctant to embark on a new cooperative experience. Added to the coffee crisis in the 2nd half of the 1990’s, the primary cooperatives were not ready to get on board until the union was established with formidable credibility. In the years that followed shortly after, the union started growing because it had proved by then that it was respectable enough to act both as a Creditor and Guarantor for the primary cooperatives. This is where the success of Yirgacheffe Coffee Farmers’ Cooperatives Union was recorded.

Since then, the union has grown to a membership of 28 Cooperative Unions with over 45,094 farmers supporting over 350,000 Family members.

In the Yirgacheffe region coffee is the main source of income and a way of life. But many farmers lack the tools, training and bargaining power to build profitable businesses.

With prices falling, making a living income from coffee has become a struggle and reaching the international market a challenge for smallholder farmers.

YCFCU was born out of a desire to keep its farmers in business and economically empowered through better organization and new market linkages in the specialty coffee arena.

What is the Current Picture of YCFCU?

The union has spontaneously grown and now currently represents:

All these cooperatives are located in Gedeo, an area found in the southern part of Ethiopia. This area is in a region that is famous for coffee growing in the country. These 62,000 hectares gardens that are dedicated to coffee alone and on average produce3,500 tons of Yirgacheffe green bean coffee each year.

The union has played a very important role in the front to improve the Livelihoods of all its members because in the past when it was not yet established, the existent primary cooperatives then, would not be able to get finances to conduct the coffee business on their own. Due to the debts incurred in the past because of political interference and governance factors, the majority of the cooperatives were struggling financially and could not in any way gain credibility to access financial support from lending financial institutions. The story has now changed. Currently the union tries to solve these problems and manages the primary cooperatives to be credible to financial institutions and also helps members build capacity to become stable and have enough working capital for their businesses sustainability. 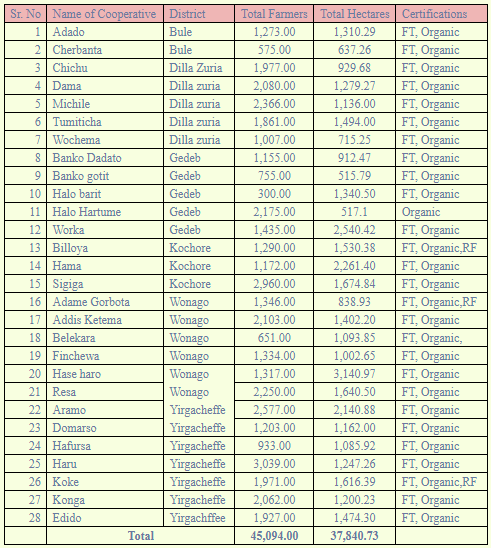 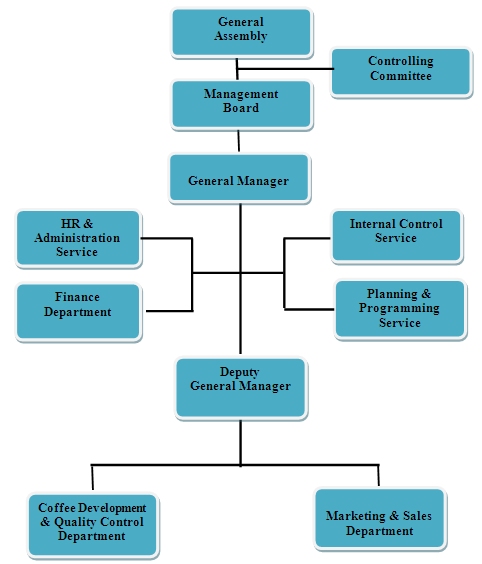 What is YCFCU’s basis of Existence?

YCFCU is mandated to export the coffee of the member cooperatives directly without middle-men, nor taking the coffee to the central market. The basic market strategy of the union is to work with customers on a one-on-one basis there by ensuring that their supply needs or demands are being met. We also try to foster in the development of a unique marketing strategy that paves way for sustainability.

Directly Connecting the Farmer to the Customer

Since most of the countries that purchase our coffee are well informed and know the roots to the coffee’s traceability, YCFCU is continuously working to directly connect member farmers to the customer.

Free Advertisement Opportunities for the Members

Since the union is a member of the various international and continental coffee specialty unions, Farmers can gain free advertisement and awareness opportunities of their coffee to an open world out there.

Our Member Farmers can easily acquire specialty market certificates for their products as a group which would otherwise be quite not affordable on individual basis.